How Crisp decreased DNS-related support tickets by 83% in a matter of minutes.

Companies do business in multiple places online, and so they need their tools to go where they go. For Crisp, that was the issue at hand: giving companies a way to centrally manage multi-channel customer support.

But support ticketing systems require setting up a subdomain, and that means that for every user, DNS configuration is an unavoidable part of onboarding.

Here’s how Crisp simplified DNS configuration for their users and dramatically decreased the number of DNS-related support tickets their team was fielding.

Crisp is a centralized customer service hub that allows its users to manage customer support tickets across multiple channels, from email, to chatbots, even down to social media messages. Crisp has a wide assortment of users, ranging from the webmasters of SMBs, down to entrepreneurs and single-employee businesses.

Part of their product setup involves DNS configuration, and it’s always been a headache.

“The issue is that setting up DNS is complex, so we needed a system like Entri so users could automatically set up their DNS and not have to contact our customer support for that.”

On average, Crisp’s support team was fielding five to six DNS-related support tickets per day. As their customer base grew, so did the burden of these tickets. Part of the account setup process involves configuring a subdomain, and that’s where the bulk of Crisp’s customer support effort was going.

“The users just don’t understand how DNS works. Sometimes, for instance when they go on a DNS manager, they’ll do support.acme.com.acme.com and repeat the domain.”

At one point, the company was even thinking of engineering their own DNS configuration tool in-house, but decided it would be too large of an undertaking.

Then, Entri reached out to them, and Crisp finally had a solution. 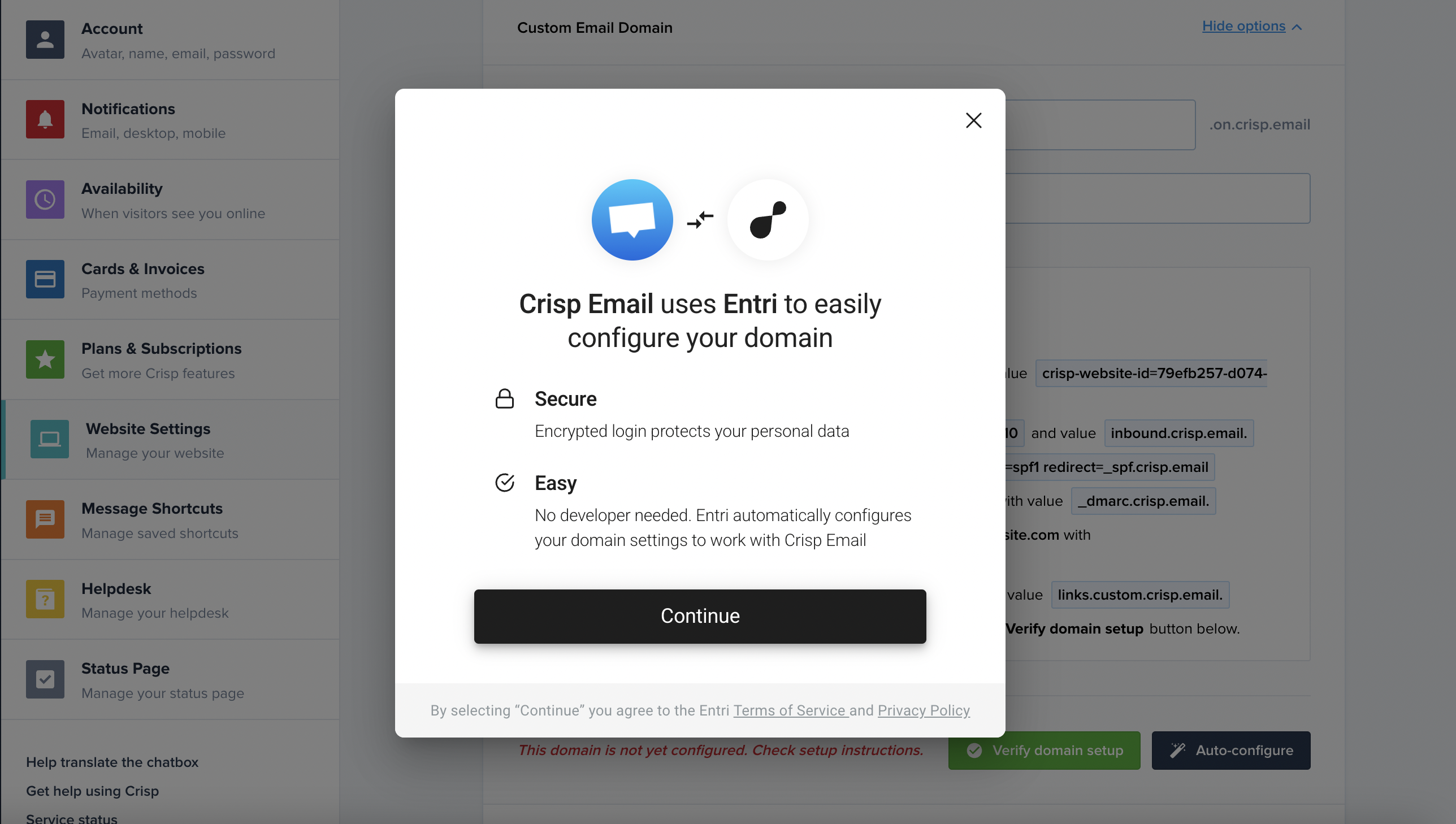 Entri connected with Crisp just a few weeks after Baptiste had started to consider building his own solution. Crisp instantly knew this was the right solution for their platform, and immediately began implementation.

Baptiste reports that implementation took Crisp about seven minutes – it was just a simple matter of pasting a javascript snippet into the web app. From there, they saw reduced friction in the user experience, and their DNS-related support tickets fell dramatically.

What’s more, Crisp’s customers didn’t even notice Entri within the user experience. Crisp never got any questions about Entri’s DNS configuration tool, and the team is quite convinced that users don’t even notice it’s a third-party app.

But with Entri, users get to excellent product experiences faster, without getting pulled out of the critical first steps of user activation to address DNS issues. Entri is a literal one-click process, and is so simple, it’s barely even noticed by the user.

“Having a solution like Entri, where they just need to click a f*$king button, it’s a game-changer.”

Reach out to our team, and see how you can reduce your DNS-related support tickets by as much as 83%.